Couple more infoblocks for some human level antagonist characters, whose action and plans/plot add a very different feel compared to the criminals, supervillains, aliens, and mythical beings Thunder Woman normally deals with. The whole thing is very much a "Metal Gear Solid/Captain America: The Winter Soldier" type deal, with shades of "Gargoyles." The whole romance with Martin Clay adds an element of tragedy to the affair as well. 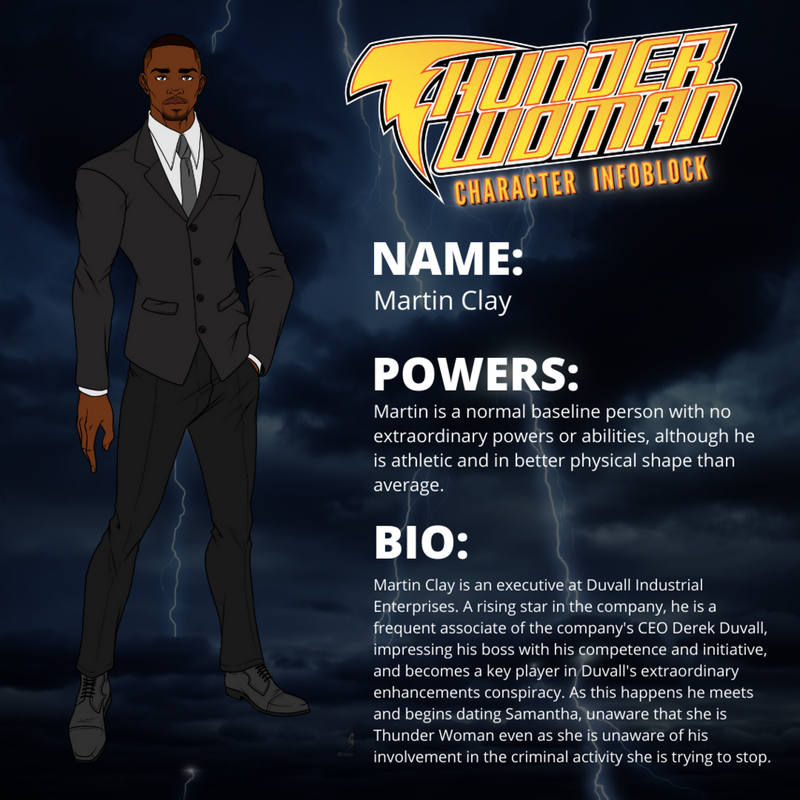 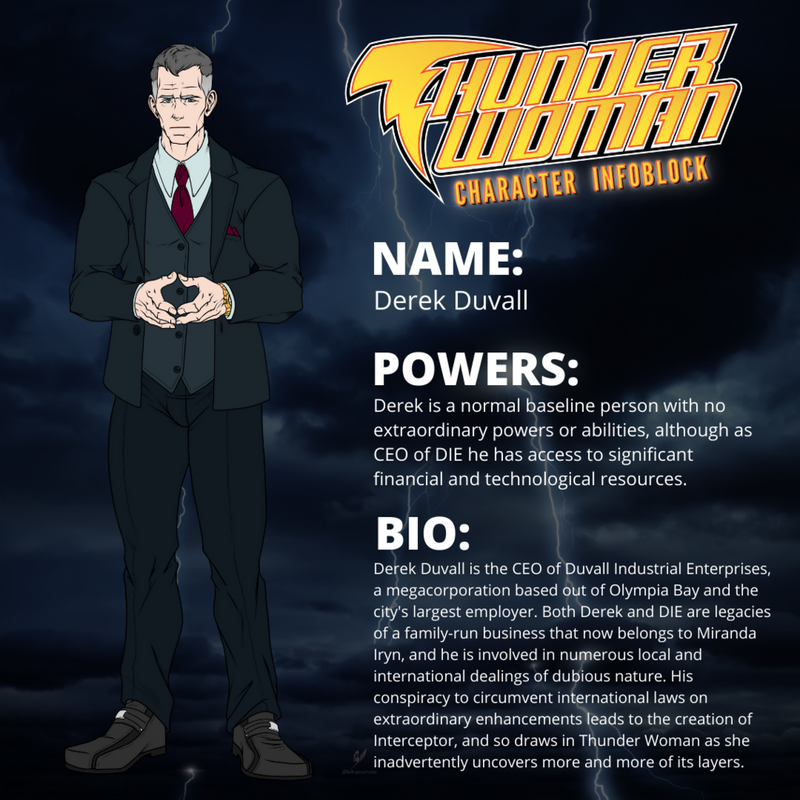 I feel I've been too silent on this, though I guess it's only been a couple of weeks and I do engage on your Discord and such, lol.

Miranda Iryn truly looks excellent- what's funny is I jokingly referred to her as a GILF in the "FDH" image you did of her (where most "hotness" features are obscured) and then he did THAT design- this mega-stylish ultra-GILF, lol. More or less the modern-day "hot Cruela de Vil" archetype mixed with the old-school Carmen Sandiego. Jessica looks ludicrously slinky and sensual- like maxing out of the "Baroness" factor and being like Miss Hancock from WCW. I like how Dr. Ira more or less has the same visual motif, but the body language and outfit transforms her into an adorbz awkwardork and not the fanservicey one.

The Martin Clay subplot always interested me- I remember you mentioning he was kind of an... idealized boyfriend type for Samantha? Like he represented this potential future life and world that she was REALLY interested in, and that was part of their relationship? And Duvall is the one who rankles under Iryn's control, right? Like he was once his own guy but now has a mega-boss and chafes under it.
Top

Jabroniville wrote: ↑Fri Aug 05, 2022 6:27 amThe Martin Clay subplot always interested me- I remember you mentioning he was kind of an... idealized boyfriend type for Samantha? Like he represented this potential future life and world that she was REALLY interested in, and that was part of their relationship?

Per our discussion in the old thread:


A lot of what attracted Samantha to Martin was this idea that he was this rich, handsome, smart, and charismatic man, someone completely out of her league, who was nonetheless interested in her. Now, Samantha's attractive, but I'm trying to emphasize that at best her beauty is a much more average, girl next door type. She only becomes an amazonian bombshell as Thunder Woman, who is Samantha's personal ideal vision of herself. The problem with her attraction to Martin is that Samantha realizes that it is completely superficial; she isn't attracted to Martin specifically, but rather the idea of him. He fulfills a fantasy in her mind, this almost Disney-esque style longing for a handsome prince to sweep her off her feet and carry her away to some magical kingdom. The actual reality is much less interesting, and by getting into a relationship with him, it ends up nullifying the fantasy.


And Duvall is the one who rankles under Iryn's control, right? Like he was once his own guy but now has a mega-boss and chafes under it.

Yup; DIE was once a family owned and run business under the Duvall Family until Miranda came along and gobbled it up. There's definitely a bit of wounded pride in Derek that, even if technically still in charge, he answers to a higher authority who is not a blood relation. Plus, Miranda made a bunch of changes and he had to go along with it, and her coming to Olympia Bay in the aftermath of the conspiracy blowing up really puts a damper on him. He does get one more shot with the "Stormriders" superhero team he sets up to "replace" TW after she gets imprisoned, but when THAT fails, well, there's Martin Clay, ready to step into his role with Miranda's blessing.
BS Digital Q's Fabrica de Heróis Gallery
BS Digital Q's Builds Thread

And now for a more solidly straightforward villain, representing the "organized crime" side of things, with a bit of a development and insight into how some other villains fit into things. 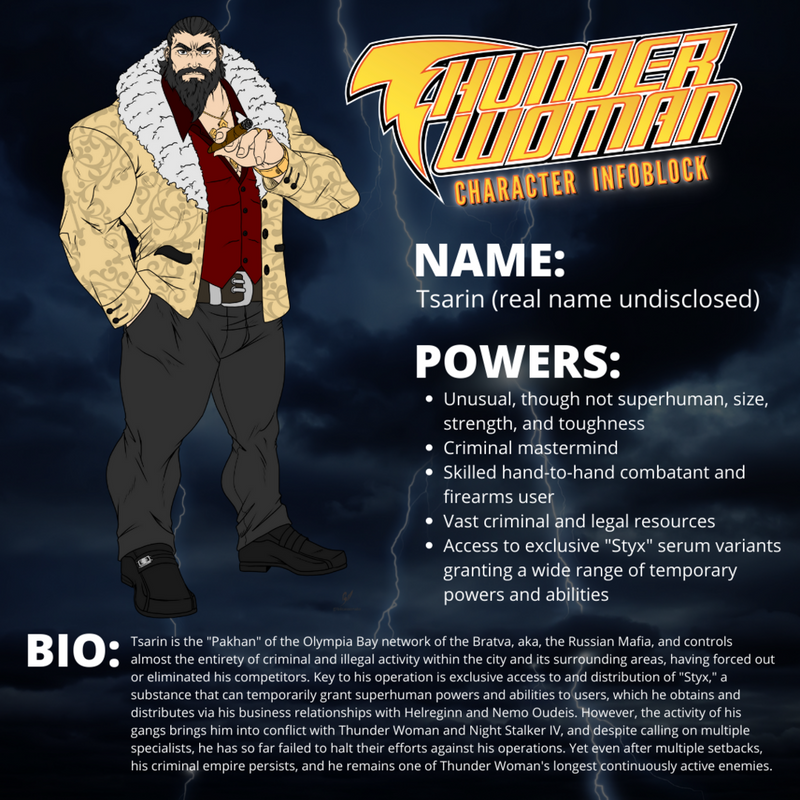 Return to “Settings of the Multiverse”