Where in all of your character write ups will go.
Post Reply
28211 posts

Was Connor saving up for the rest of his shirt?
'A shared universe, like any fictional construct, hinges on suspension of disbelief. When continuity is tossed away, it tatters the construct. Undermines it'
Top 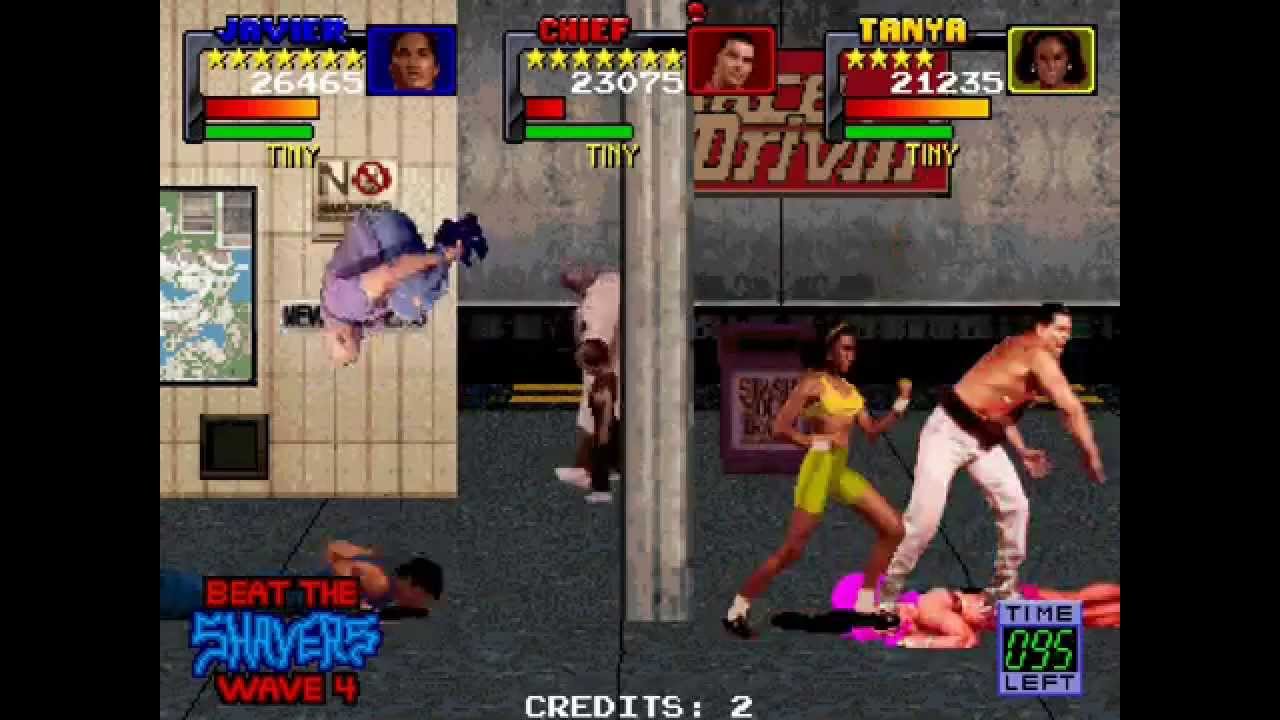 Someone did fanart of TANYA?

-The only female fighter you can play, Tanya is a black girl and "Roller Champion" in yellow or red tank top and shorts who fights using an agile style, including a spin-kick, and her "Magic" is a blue tornado thingie.
Top

Sounds like someone didn't know how to be cool in 1992.
Top 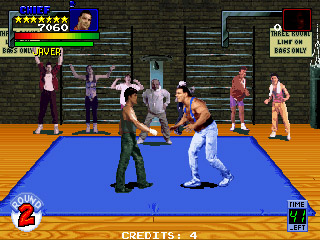 -A big pro wrestler "out for revenge", Chief is the Big Guy of the squad, but is soon joined by the Dreads' leader Jay-Jay in that tier. His "Magic" sends out a trio of increasingly-large curved lines when he claps his hands- effective a sonic blast.
Top

-An extremely muscular black dude with dreads and pajama pants, Jay-Jay is the leader of the "Dreads" and is a stage boss in the "Slums" area. Joining your quest, he equals Chief in power. His Special Move appears to be a three-hitting spinning backfist of sorts. His gang humorously looks like a bunch of crackheads, but are actually supposed to be Jamaicans- they just lope forward and hang their heads strangely.
Last edited by Jabroniville on Fri Nov 26, 2021 8:17 pm, edited 1 time in total.
Top -A muscular bald white guy in tight grey, red or blue jeans, Boris leads the "Shavers", who are humorously a gang made up of a guy in a trenchcoat, pallete-swapped female punkers (I hate punkers) with mohawks (green or pink!), and big fat guys who can nonetheless do somersault sentons and piledrivers. His "Magic" sends out a single spinning chain.
Top

-A standard-issue ripped Asian guy in baggy kung-fu pants, Kwan is the leader of the Dragons and boss of "Chinatown", a stage which consists entirely of Lis and Sue Lees, the latter of which look hilariously like nail salon workers. Kwan more or less fights like Bruce Lee, though, albeit Bruce never did a Cartwheel Kick that I can remember. His stage consists of simple storefronts while "Asian music" plays, and ends in an actual strip club, where a woman in lingerie does single-frame dance moves during the fight.
Top

Re: Jab’s Builds (Pit Fighter! Guardians of the 'Hood!) 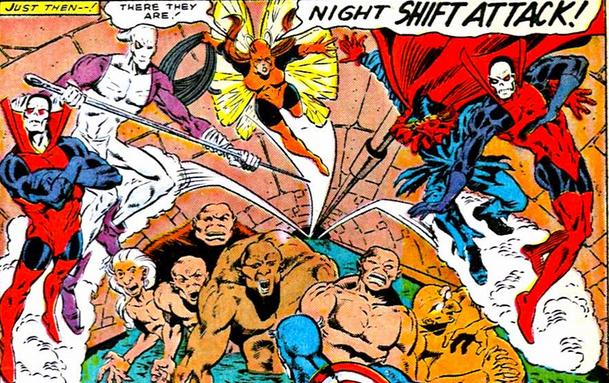 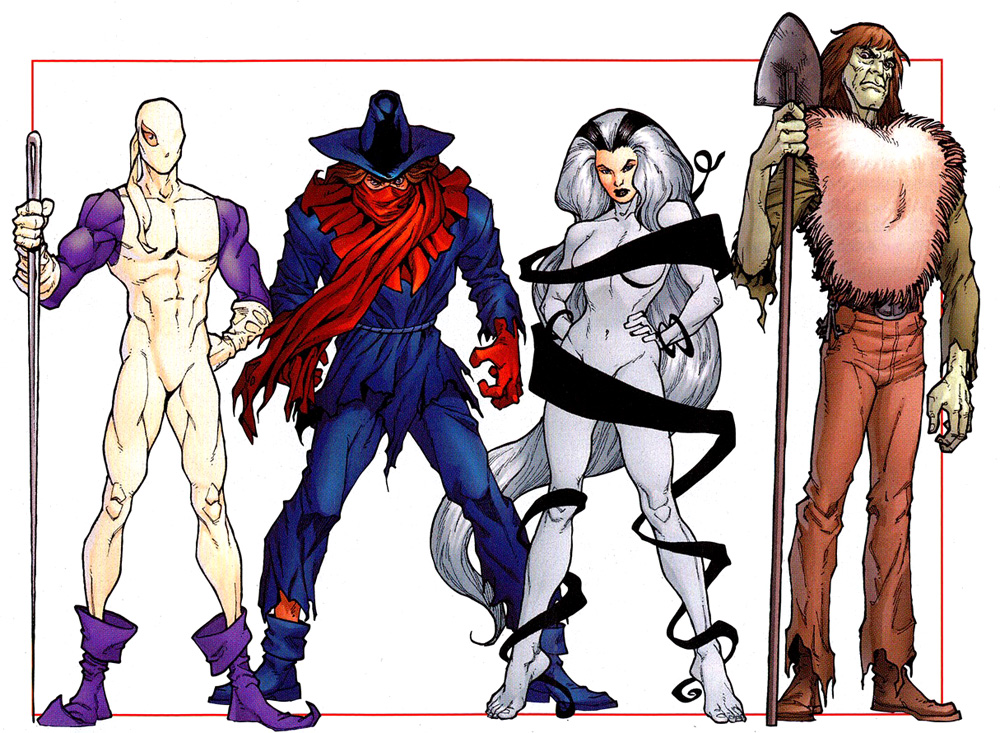 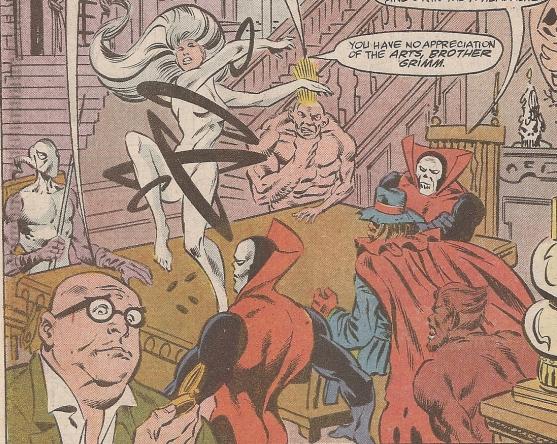 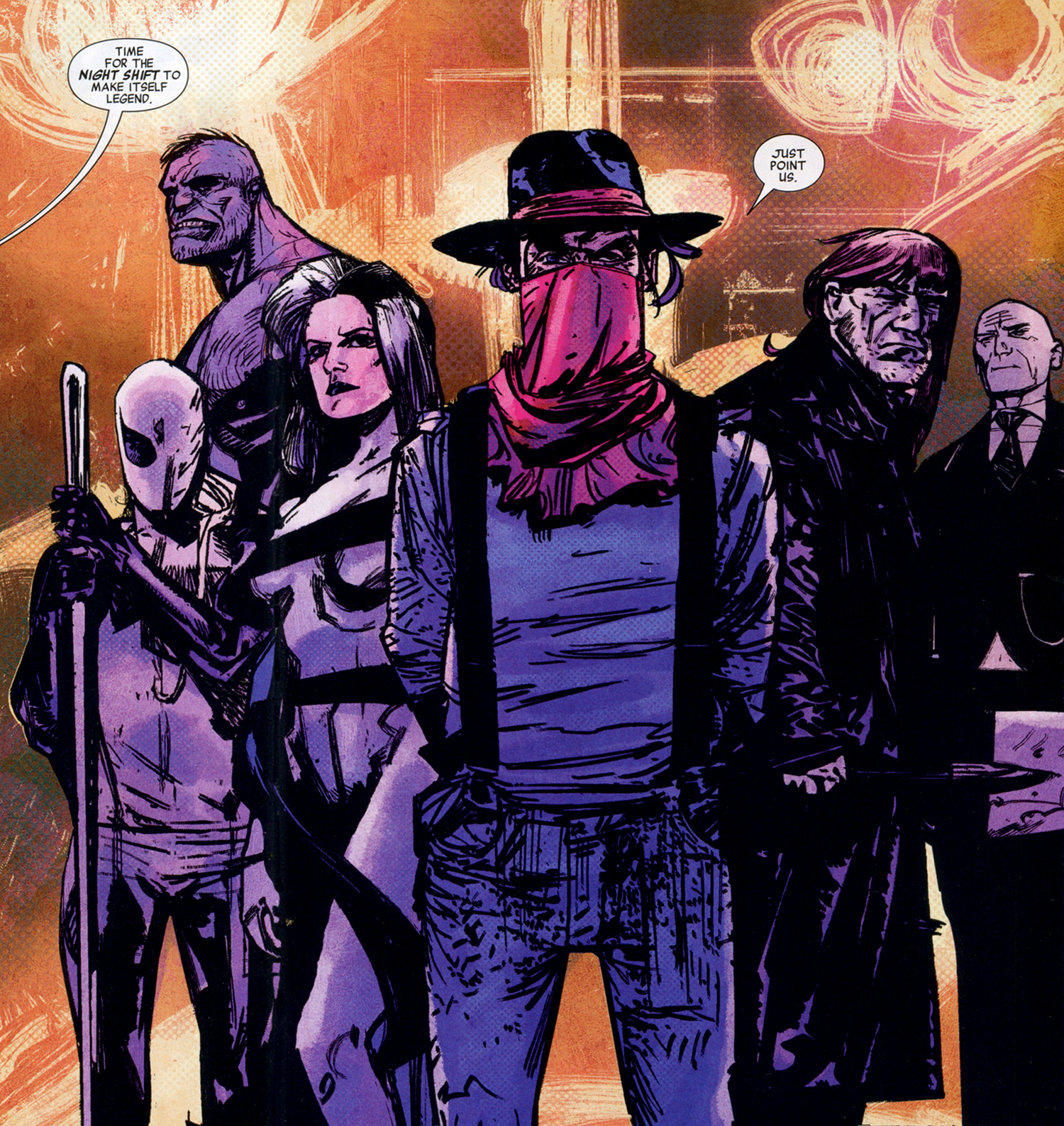 -The Night Shift are a very peculiar band of villains- minor characters all, they were a Mark Gruenwald concept. Naturally, this meant they were all incredibly obscure, forgotten characters, taken piecemeal from stuff like the cancelled Spider-Woman series and Marvel's Horror comics of the 1950s. They were initially founded by the Shroud- a gang of serial killers & super-villains combined to do good... somehow. The Shroud (a semi-good guy who acted as an anti-hero) and his ally Jack "Werewolf" Russel would send them against villains, and share the spoils among the group (almost like a pre-Thunderbolts Thunderbolts- Kurt Busiek was often a latter-day Mark Gruenwald anyways, but a better writer overall). In this debut appearance, it was Shroud, Werewolf by Night, Dansen Macabre, the Brothers Grimm, Digger, Gypsy Moth, Needle, Tatterdemalion & Tick-Tock- a big group, all in all. In a two-issue arc, they teamed up with Captain America to fight the Power Broker.

A couple years later, they appeared in West Coast Avengers- Mockingbird had observed the Digger burying some dead criminals, and captured him- the Night Shift appear at the WCA compound to spring him. They are defeated (they were doing okay until Wonder Man showed up), but the Shroud appears to teleport them away. After that, the team booted out Shroud and went into business as a generic villain outfit- now led by the Hangman, they were empowered by Satannish, turning them into PL 10-11 bad-asses who could beat the Avengers in a fair fight, but when the Avengers convinced them that Satannish would take their souls, they refused the boost and Satannish was beaten. They later reappeared after a few years in Captain America again, but were down to only four members- Gypsy Moth, Dansen Macabre, Needle & Tatterdemalion.

The group then sat on the shelf for more than a decade, reappearing during Marvel Zombies under the command of the Hood. They are turned into zombies, but transform back at story's end. Snapdragon later hires the team (Macabre, Digger, Needle, Tatterdemalion, Tick-Tock & Misfit) to kill Moon Knight on behalf of Count Nefaria, but they fail- they are bailed out of jail, but Nefaria turns them to ashes. During the Spider-Geddon story arc, Macabre & Digger turn up alive, teaming with the Brothers Grimm & Gypsy Moth (plus new hire Waxman) just acting like standard robbers. The Superior Octopus (Otto Octavius in a cloned body of Peter Parker's) arrives with gear specifically designed to be immune to their powers and handily defeats them. They later help him out on some cases.

As a group, they're not super bad-ass (Avengers teams mop the floor with them), though Shroud & Dansen Macabre are PL 9 characters and can thus hold their own. Most of the others are like Scourge-Victim-Level, and kind of suck.

The Roster:
The Shroud- A would-be Batman who was thought of as a criminal and had some dark leanings, but was sort of a good guy.
The Brothers Grimm- A duo of Gimmick-Using losers.
Dansen Macabre- One of Marvel's THREE strippers-turned-supervillains, using a dance that could either hypnotize or kill.
Digger- A Cryptkeeper knock-off from a Tales From The Crypt knock-off, who would tell tales while burying his victims alive.
The Hangman- From the same series Digger came from, he's a wannabe actor who sold his soul to Satannish (the Elder God) and became a superpowered Demon Minion. He was with the team for only one story.
Needle- A one-shot Spider-Woman foe who sewed people's mouths shut and had a Hypnotizing Stare.
Gypsy Moth (aka Skein)- A forgettable Spider-Woman villain later used a couple of times by Gruenwald, then turned into a TOTAL skank.
Tatterdemalion- A bizarre "Marvel Team-Up"-class villain who's a hobo who destroys money. He's been kind of a Journeyman Jobber.
Tick-Tock- A Spider-Woman background villain who can see the future.
Werewolf By Night- A 1970s Horror character that went nowhere, but gets trotted out every decade or so. He aided the Shroud in the early formation of the group, but doesn't appear on any later team.
Misfit- A forgotten freak character deformed by the Power Broker's process- he was mostly forgotten once Gruenwald died.
Waxman- New hire as of 2018 comics.
Top

-The Digger was the "Host" of a pair of EC Comics knock-offs called Tower of Shadows and Chamber of Darkness, in which he would tell various horror tales to his victim whilst he was in the process of burying them alive. Basically he was a gigantic rip-off of the Cryptkeeper. Lasting only a handful of issues (there wasn't a lot of horror stuff in the late '60s), he was brought back twelve years later by Ann Nocenti for a one-off in Spider-Woman, where he has become delusional, imagining everyone as already dead. Compelled to then bury them, he kills a few people this way before the husband of one of his victims hires Jessica Drew to stop him- she effortlessly KOs Digger with a single punch and has him arrested.

-Five years later, he's brought back among other Spider-Woman & Horror characters by Master of the Obscure Mark Gruenwald, who would bring him into the Shroud's team. Why ANY super-hero would work with an actual SERIAL KILLER is beyond me, but maybe he'd been lightened up by that point, I dunno. He was apprehended by Mockingbird in the group's second appearance, as she caught him burying some of his victims. When they fight the Midnight Sons during Marvel Zombies, Morbius takes Digger's shovel and buries it in his head. Digger returned in a Marvel MAX limited series called Dead of Night (as a narrator to The Man-Thing's tales), and was later killed with much of his team by Count Nefaria... and naturally reappeared only a couple years later fighting the Superior Octopus.

-The Digger has some minor skills and abilities, but is generally a small fry in the grand scheme of things- in one of his first canonical appearances in the mainstream Marvel Universe, he got beaten handily by 1980s MOCKINGBIRD, who was never portrayed as a major player.
Top 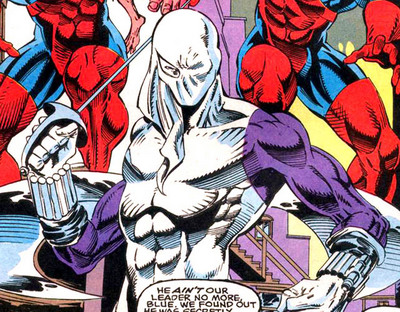 EEEEEEEUUUUUUUURRRRRRRGGGGHHHHH that damn weapon greebles me out. Something about it just seems so unpleasant, even compared to like... practical swords and stuff.

Complications:
Disabled (Mute)- Josef Saint was left mute and blind in one eye as a result of a mugging.
Motivation (Hurting Young Men)- After being victimized by a mugger, Saint now hunts young men on the streets, hypnotising them and sewing their mouths shut (!!!).

-The Needle has the particularly-ghastly tendency to SEW PEOPLE'S MOUTHS SHUT, something he started doing when some hoodlums robbed him of his voice and one of his eyes. His rage metastasized until he was able to hypnotize young men (guilty or not), then sews their mouths shut. As an elderly man, he was no match for Spider-Woman- she resisted his hypnosis and zapped him at close range, and he was arrested. His only other appearance in Spider-Woman was as another villain kidnapped by the mysterious "Locksmith"- he didn't even get a speaking role. And wouldn't ya know Gru would re-use an ANCIENT Jobber Villain for his "Night Shift" team, as Needle was one of his own creations. He doesn't get up to much, though- just appearing in the background with his team in all the stories.

-Needle is seen in a handful of these stories, and once goes down solo to Armory in the backstory of an Initiative issue. He was later part of a team that failed to capture Moon Knight- Count Nefaria incinerated them for the failure. A few other Night Shifters have since turned up alive, but the Needle has not. Pretty much his entire existence aside from his origin issue has been as "Filler".

-Despite being an old man, the Needle was pretty strong. He wasn't much good against any heroes at all, but was good enough to tag Daimon Hellstrom one time with his yardstick-length Sewing Needle (UGH, such a nasty-looking weapon. Could you IMAGINE being jabbed with that thing? Way creepier than a sword).
Top