Where in all of your character write ups will go.
Post Reply
20551 posts

-Yeah, so the American Godzilla movie was a giant piece of crap, ripping off Jurassic Park as well as making Godzilla into an irradiated iguana that ate tuna and laid eggs that turned into a bunch of Velociraptor rip-offs. Despite having Ferris Bueller, That French Guy (Jean Reno), the big-nosed chick from NewsRadio, and more, it was a complete failure. Hell, they even had a Roger Ebert parody as the mayor, who DIDN'T EVEN GET KILLED? I mean, what was the point? Even Roger Ebert said it would've been funnier if his Expy had been killed, instead of just made to look like a tool. There's a reason this franchise never took off, and the Japanese gave him the most hilarious fate in the history of Kaiju in Final Wars. Godzilla & "Zilla" (usually nicknamed "Godzilla In Name Only" or "GINO" by fans) stand off against each other, pose... and Godzilla promptly one-shots him into the Sydney Opera House, then blows him to pieces in a furious onslaught of atomic fire! A THIRTEEN SECOND fight scene!

-So Zilla here is actually quite dangerous, but he's hanging with the entirely-wrong crowd here... PL 12's very powerful (essentially this build is like a T-Rex advanced to a tremendous scale, but against Godzilla himself? He has no chance. He doesn't pack the sheer size (he's longer than some Kaiju, but is built more like a real Carnosaur than a massive super-beast, giving him a "puny" weight of 400 tons, versus 30,000 for Godzilla (in the Showa era, no less!). He's fast enough and strong enough to fend off the military for a good long while, but is still vulnerable- a handful of missiles is what finally killed the beast, something that the real Godzilla would just get annoyed by. Still, Evasion & Defensive Attack are NOT usual Advantages for a Kaiju, so he stands out a bit.
Last edited by Jabroniville on Wed Jun 20, 2018 5:45 am, edited 2 times in total.
Top

I generally view this movie as being more of a remake of The Beast From 20,000 Fathoms rather than anything to do with Godzilla.
Top

That does give a good indication of the sheer mass some of these guys have. I mean, most Godzilla Kaiju apparently run between 20,000 and 90,000 tons, with the more recent 100 meter/yard Godzilla being something like 130,000-to-150,000 tons. And to be able to toss each other around the way they do, they need to be able to lift that kind of weight themselves. Hell, Jet Jaguar could lift another 20,000+ ton Kaiju over his head and throw it several hundred feet up into the air.

It's not quite "Under 4 billion tons stands the Hulk, and he's not happy!", but it's still damned impressive. Of course, the official M&M write-ups of Superman's 200,000 ton lifting strength makes him strong enough to lift even that 100 meter Godzilla. Comics ya'll. I love em.
Top

On a related note, I've heard of some folks being apologists for this movie, alongside Batman and Robin and other Schumacher-era Batman movies. I could never find myself agreeing with them- these films were immensely flawed, and seeing them as "Comedies" doesn't actually make them better, since that wasn't the intent with the movies.
Top

-Mighty Joe Young is a blatant King Kong rip-off from the '40s (done by the same people), that was brought out of the mothballs in 1998 for a remake, owing to the success of recent CGI hits like Jurassic Park. However, the movie bombed dramatically, making about $50 million from an $80 million budget. He grows huge due to a glandular condition, and other Gorillas don't want to be around him- also there's a poacher who carries a grudge because a young Joe tore off some of the guy's fingers. I never watched the movie (it's most-notable now for starring Charlize Theron during her initial "Hollywood Hype Machine" push, that stalled out and she had to be remade as a legitimate actress).
Top

This one is priceless. Hey look! Jennifer Lee, co-writer of Wreck-It Ralph and Frozen, is now in charge of Walt Disney Animation!: https://www.hollywoodreporter.com/heat- ... on-1121432

With John Lasseter stepping down (apparently problems with booze AND inappropriateness with female staffers), they needed some of their established newbies stepping in, and as a proven success, she was the best fit. It'll be interesting to see how they manage without Lasseter, who is widely considered the primary mastermind behind a lot of Disney's recent success stories.
Top

There was also, surpisingly, a cartoon sequel to the 1998 Godzilla movie, featuring Zilla's son. I don't actually recall anything about it, but "Zilla Jr." does have the atomic breath, and is quite a bit larger and heavier. And I definitely remember seeing the scene from Final Wars where Godzilla blows the hell out of Zilla on YOutube back in the day. I always thought it was really funny. Plus the alien guy's reaction afterwards (in the dub): "I knew that tunahead wasn't up to much!" Even the aliens recognize how bad Zilla is! A funny thing, though: Zilla actually appeared in a few Godzilla video games prior to the movie's release, before Toho found out how bad it was and dubbed them "Zilla".
Top

-Baragon debuted in the Frankenstein Toho series (where even THAT character got the super-sized Kaiju treatment), but appeared later in the Godzilla series proper, with a big of a size boost and a background role in Destroy All Monsters. He showed up surprisingly in the Millennium series as well, as a guardian monster alongside Mothra & Ghidorah (!?!). He's a pretty standard PL 14 Kaiju, but with a Heat Breath weapon, a horn that Lights the Environment around him, and supreme Burrowing abilities, far beyond even Anguirus. He's kind of an unsung hero and underdog, but rather generic.
Top

meh, I don't hate Zilla like others do. It's not the best movie, but it's not the worst either. Godzilla's Revenge still exists after all.


I'd bump Zilla up to 13. I mean if Gezora can be 13 after being taken out by gasoline, I'd say ol' GINO up there could be too. I mean it took what...twelve missiles to kill him? Twelve Madison Square Garden destroying missiles?
Top


-Baragon debuted in the Frankenstein Toho series (where even THAT character got the super-sized Kaiju treatment), but appeared later in the Godzilla series proper, with a big of a size boost and a background role in Destroy All Monsters. He showed up surprisingly in the Millennium series as well, as a guardian monster alongside Mothra & Ghidorah (!?!). He's a pretty standard PL 14 Kaiju, but with a Heat Breath weapon, a horn that Lights the Environment around him, and supreme Burrowing abilities, far beyond even Anguirus. He's kind of an unsung hero and underdog, but rather generic.

yeah, he was used in GMK and originally it was going to be Godzilla fighting he, Varan, and Anguirus, but Toho told the director to use Mothra and King Ghidorah as they were more profitable amd popular.

Baragon's heat ray may be the single weakest energy attack I've ever seen in a kaiju movie. He flat out nails Frankenstein dead center with it in the movie....to zero effect. I mean this isn't like Rodan's tanking of virtually any energy attack. It's Frankenstein FFS
Top 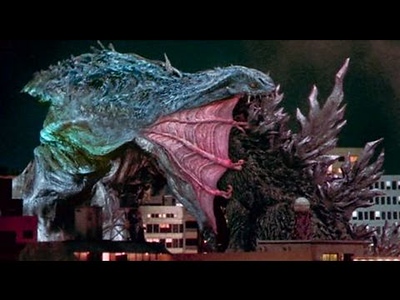 -Godzilla 2000was the only Toho Godzilla movie I'd ever seen in theatres, and I actually remember very little about it other than what I've read about it since then. It was your standard Godzilla movie in most ways, featuring a random new monster (with more than one form) that showed up, fought well, and then got its ass kicked. I mean, who takes a creature with the most famous breath weapon in the universe and PUTS HIS HEAD IN THEIR MOUTH? Orga is roughly akin to the Showa-era Godzilla foes, since he's only barely larger than their standard (apparently everyone took a shot in height after the Heisei era ended and shrank by almost half. I have no idea why), but has a few unique tricks, mainly his Shapeshifting Mimicry, which requires him to grab and take the powers of his foes. I don't think he outright drains them, though. Despite being Godzilla-level in power, he's INSANELY expensive, since his Mimicry is relatively high level, in addition to his other powers.
Last edited by Jabroniville on Thu Jun 21, 2018 7:25 am, edited 1 time in total.
Top

way i hear it is they made them smaller because some higher ups thought they were TOO big in the Heisei era. can't fault it. 160 feet or so is plenty big.
Top

Original Character - Do Not Steal

-Another "Ultraman"-type hero, Zone Fighter hails from a 1973 TV show that involved a lot of actual Toho Kaiju. Godzilla, Gigan and King Ghidorah all appeared, and the show was said to be in the official Toho Showa-era canon! However, the oil crisis of the '70s resulted in the early cancellation of the show at only 26 episodes.
Last edited by Jabroniville on Thu Jun 21, 2018 3:24 am, edited 1 time in total.
Top

That was a sad fact of life in the 70's,as a lot of good shows got cancelled due to that Oil crisis even in the U.S. Zone Fighter might have been a cash-in to Ultraman,but it was a really well-done attempt.Adding in Toho monster stuff was a brilliant idea...
Top
Post Reply
20551 posts