For those with an inclination towards visual arts.
Post Reply
97 posts

Well this is a surprise.

Yeah, if you want more up to date stuff, my DA page linked above is the main place to go, though I will sometimes share stuff well in advance of my posting there in my personal Discord group. I just find maintaining two or more places to share this stuff rather exhausting. Hell, even DA has become a drag ever since the changeover to Eclipse earlier this year, though enough of the original functionality is still there to keep me using it.

I have thought about returning to this thread or possibility rebooting it with a new one. A lot has changed in the three years since I last updated. I've made some new characters, redone a bunch, with more planned. I never really get as much done in a year as I'd like, but these things take time, and I seldom have that kind of time outside the weekends, and even then I sometimes just don't have the energy, inspiration, or motivation to work on a character. Sometimes the best work is done by letting concepts and ideas stew in the brain for a while. Just wish it didn't take so long...

Anyway, thanks for all the kind words and compliments. My time is such that I haven't even really been able to keep up merely reading stuff like Jab's thread, let alone any sort of commenting or posting, but I've been drifting back here ever since I caught wind of the brewing anger toward Gamebook's thread in the indie comics communities I hang out at over on Facebook and warned Ares about it. Not sure if I'm gonna do anything just yet. I still harbor hard feelings toward Green Ronin that taint my perception of the MnM system, and so I think I probably won't do any more builds with it. In the meantime, I've been checking out a bunch of different superhero RPG systems, hoping to find one that tickles my fancy enough to make it the official system for my characters and settings. I'm holding out that that will be the one Ares is working on, but we'll see. There's the new Aberrant, Prowlers & Paragons, the upcoming Absolute Power from the new BESM guys, etc, so lots of possibilities. Here's hoping something works out.

I didn't even know about the Builds thread, so that will give me some new reading.

The DA page is hard to navigate, but I'll look around there too.

Personally, I have no issue if you don't post builds in MnM; I don't play it.

If you're interested in requests for consideration for a system, I'll throw out Sentinel Comics, which is what I switched my home game to this year.
Fight! 2nd Edition Available Now!
Top

drkrash wrote: ↑Sat Dec 12, 2020 11:59 amIf you're interested in requests for consideration for a system, I'll throw out Sentinel Comics, which is what I switched my home game to this year.

Yes, though the game doesn't require you to use that universe.
Fight! 2nd Edition Available Now!
Top

Gotcha. Will add that to my list of systems to check out.

For context: earlier this year, in April to be exact, was Thunder Woman's 10th Anniversary. Even though I did not celebrate that milestone here, and only just returned to quasi-activity within the past month, I do feel the need to share this message to close things out and usher in the new year. 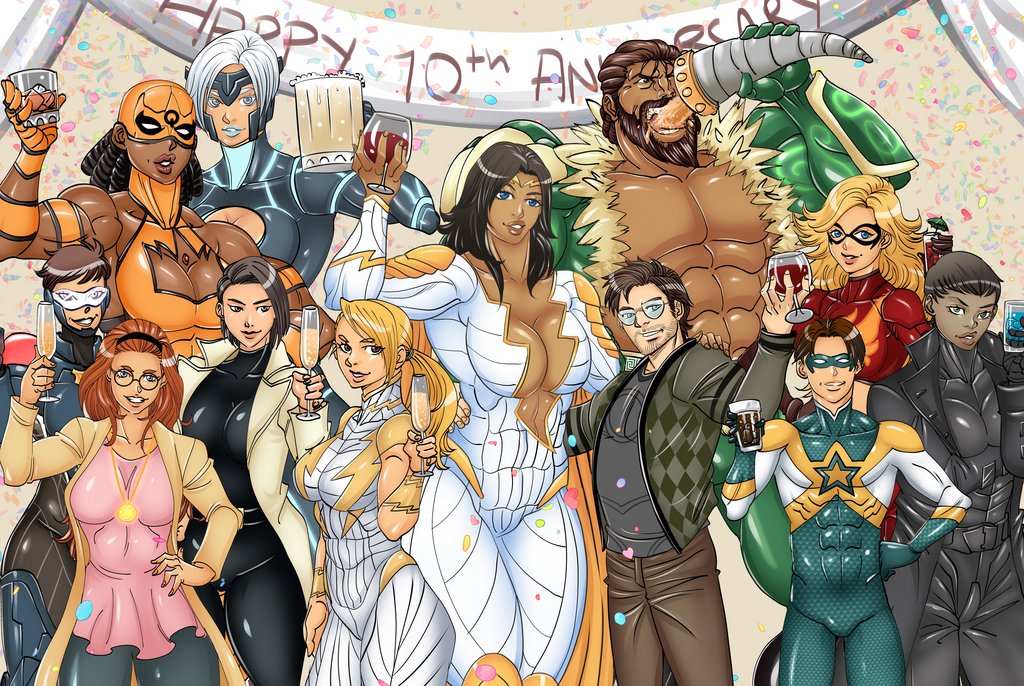 10 years. It's a long time, yet it goes by so...insidiously. Seems slow in the present, fast in retrospect. The biggest benefit and flaw of the steadfast flow of time, or our perception of it.

Boy when 2020 came along I did not expect it to be such a horrendous crapshoot. While there were a few highs, there were so, so many deep lows, and I don't think I've lost so much as I've had this year. So many beloved friends and figures of adoration, gone literally or figuratively. What a year to mark Thunder Woman's 10th Anniversary.

And yet throughout this garbage fire of a year, I've had you guys, both here and on other platforms like DeviantArt, Facebook and Instagram. While Thunder Woman is a personal passion project that I have done mainly for my own creative self-gratification, the love and devotion that you guys have shown has been a major boon. I still can't get over how so many people will tell me in our chats how much they love Thunder Woman or how much the world I have created with her has influenced or inspired them. While I may still consider it my personal passion and hobby, this really has grown far beyond that and gone to the next level with how much it has touched so many people.

So from myself, Thunder Woman, and all of her closest friends and allies, I just want to say: Thank you. For everything. For your love, your fandom, and for helping to celebrate her 10th anniversary this year. Here's to an infinitely better 2021, and to the next ten years. I hope to see some exciting things happen in that time, so let's go for it.

Return to “The Art Room”