The place to talk about your favorite novels, comic books and web comics.
Post Reply
9 posts • Page 1 of 1

So it's very likely this will only appeal to me, but what the heck. It's 2020 and I like it when something wholesome springs from something ugly, like Pegasus springing from the decapitated body of Medusa. And it all starts with this comic: 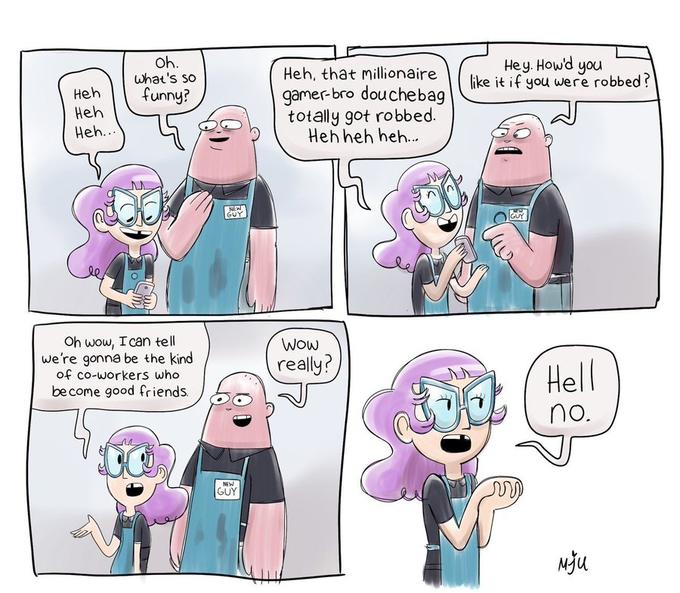 So, on the internet there is one Mallorie Jessica Udischas, aka SweetBeans99, whom I'll hereafter refer to as SB99 for short. SB99 is a Tumblr artist who puts out comics like this: 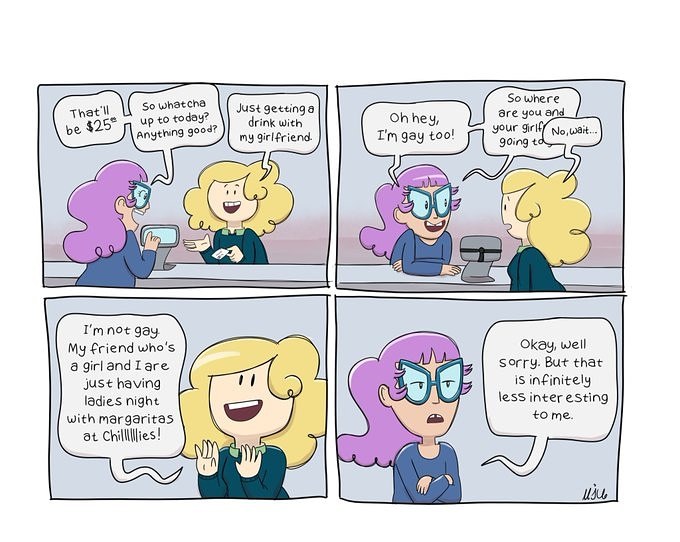 If you couldn't guess, the purple haired character is their self-insert character. So in December of last year, Youtuber PewDiePie's home was robbed, with most of the stuff taken belonging to his wife. SB99 made a comic wherein the purple haired girl laughs at PewDiePie's misfortune. That's the first comic at the start of the page.

Like myself, if you didn't know the context, you might have thought that the girl was the jerk of the comic, while the New Guy was the protagonist. Instead, we're suppose to actually be on her side, not his. He's suppose to be a strawman to be mocked.

But as people like Clownfish TV ( https://www.youtube.com/watch?v=F89TJzJIu6Y&t=3s ) and others ( https://reclaimthenet.org/new-guy-meme-2020/ ) are reporting, something funny happened on the internet. The internet has taken the New Guy, his apparent niceness and empathy, and turned him into this new Baby Yoda-like meme for postitivity and empathy. Now there are multiple images of the guy floating around the net, almost all of them about being positive or just being wholesome. And when the artist started receiving flack for celebrating that someone was robbed, New Guy was used to say that even if that opinion was terrible, it wasn't right to bully anyone.

It's just kind of amazing that there's a lack of self-awareness in someone that you wind up creating a strawman who becomes far more beloved and popular than your "hero". It's also nice to see the internet actually celebrate something for being nice and wholesome as oppose to a lot of the negativity we often see on there. Maybe it's a sign of good things to come? 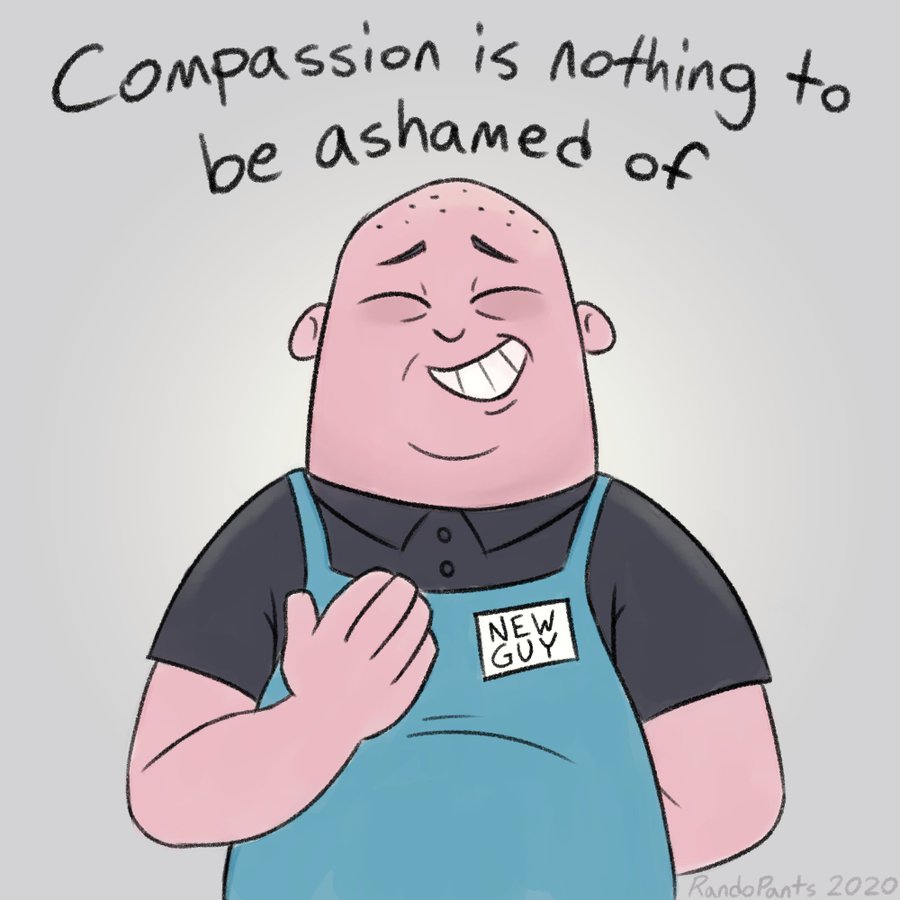 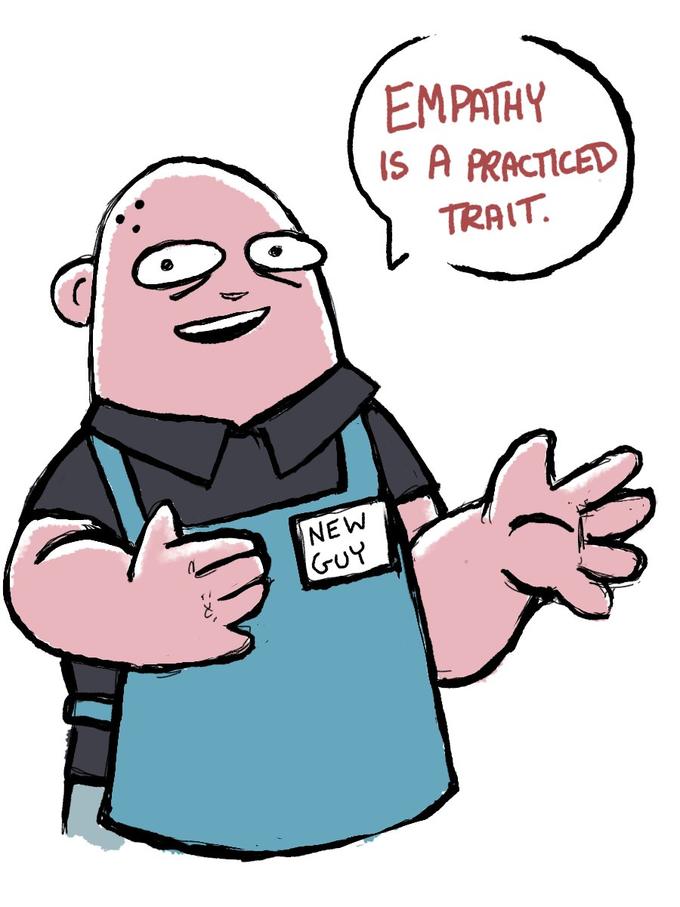 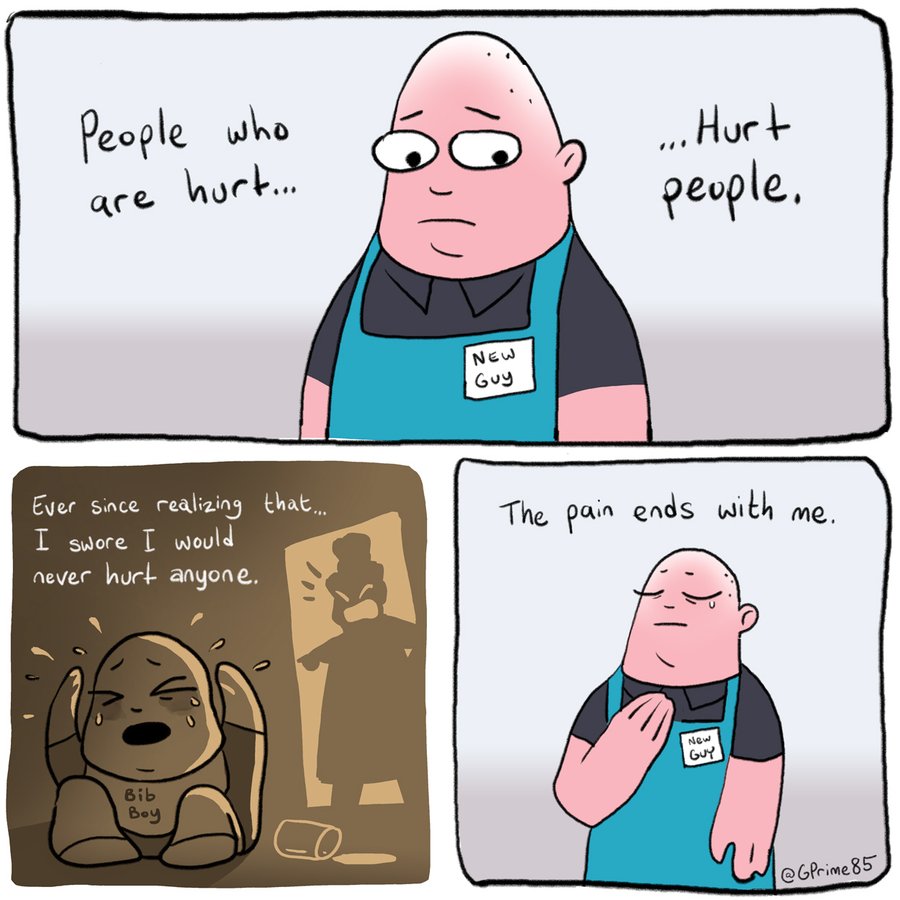 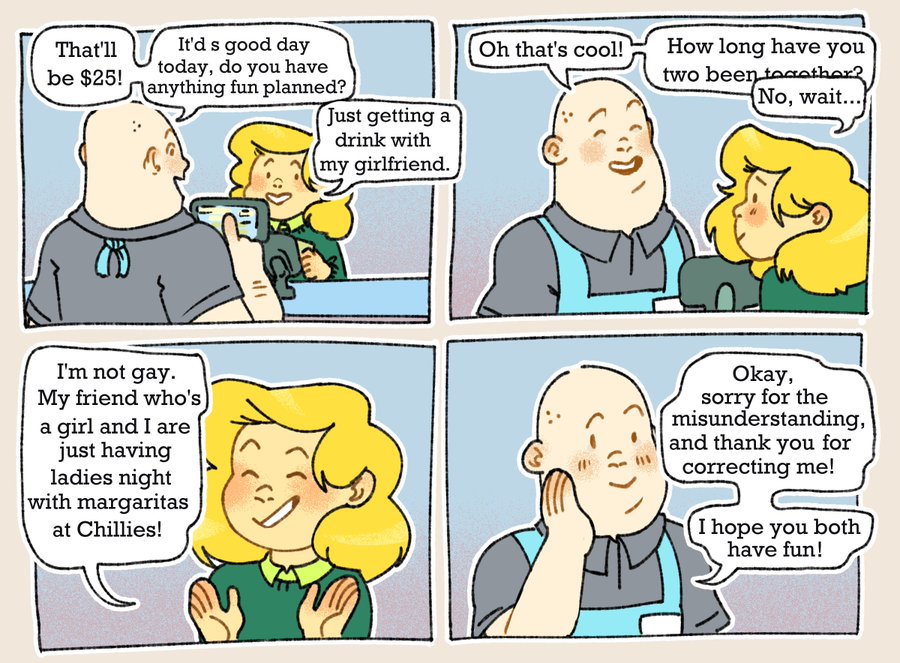 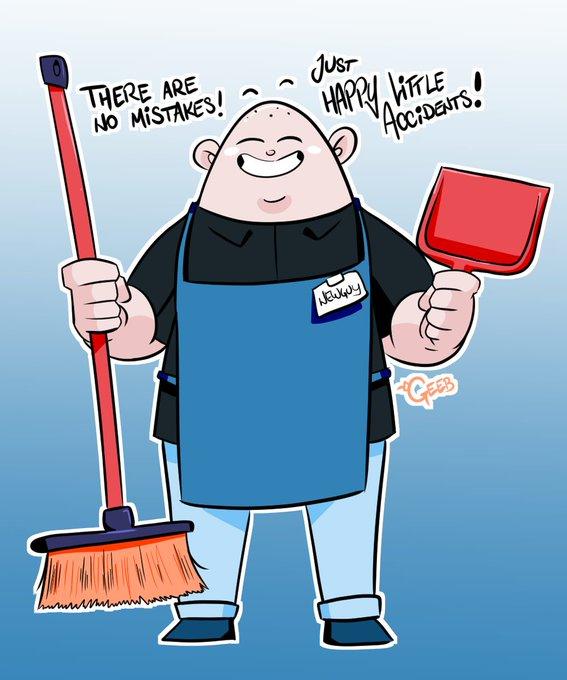 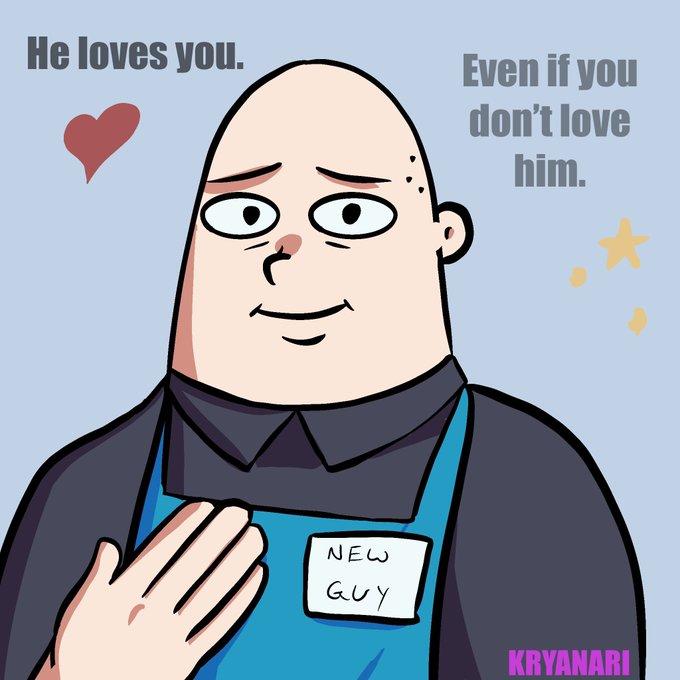 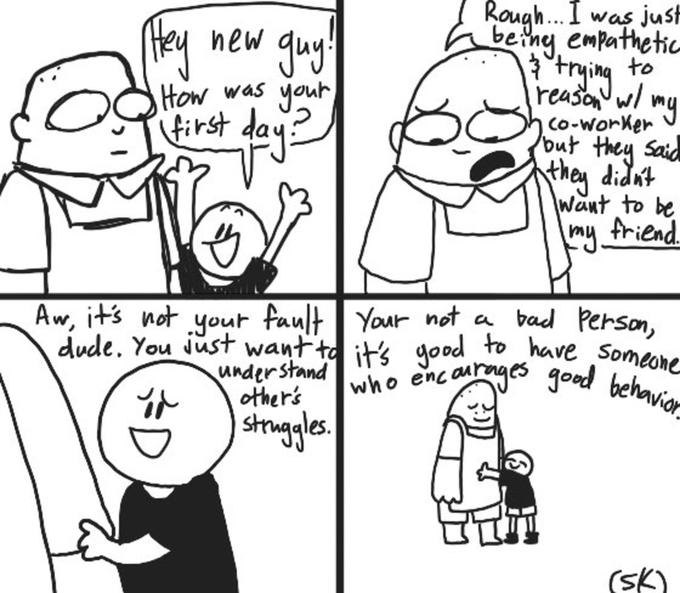 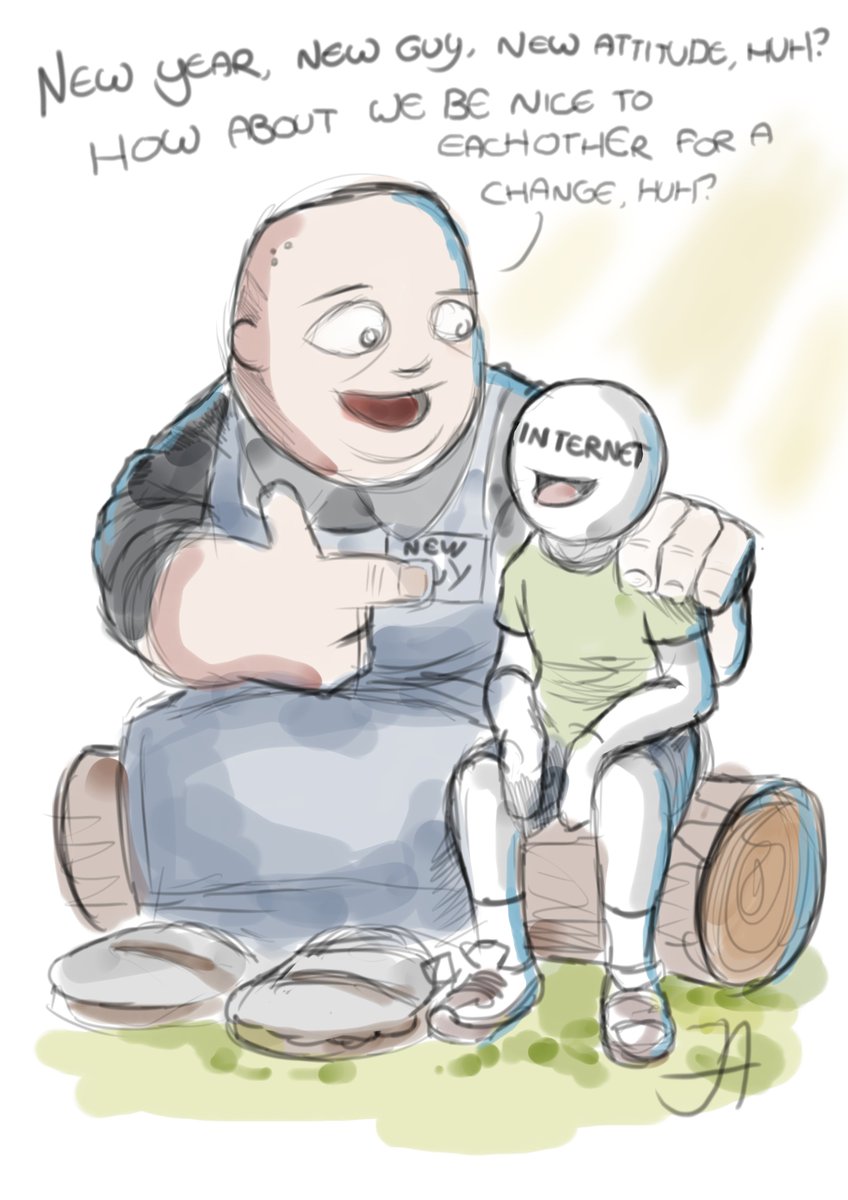 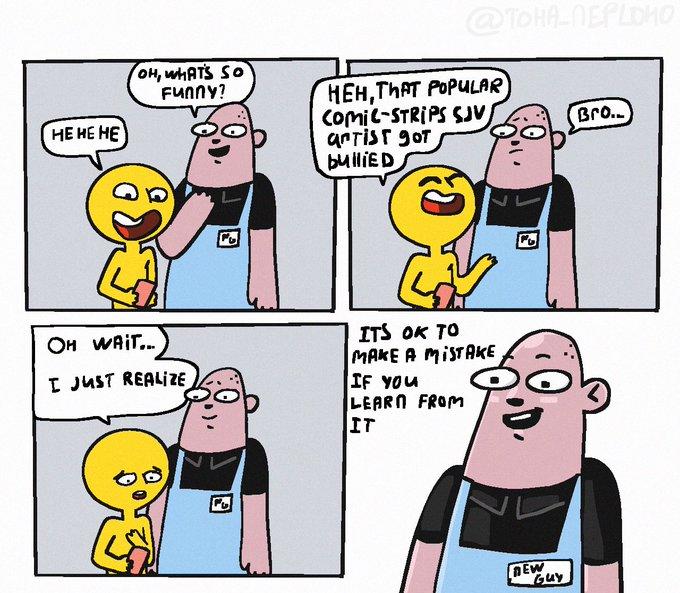 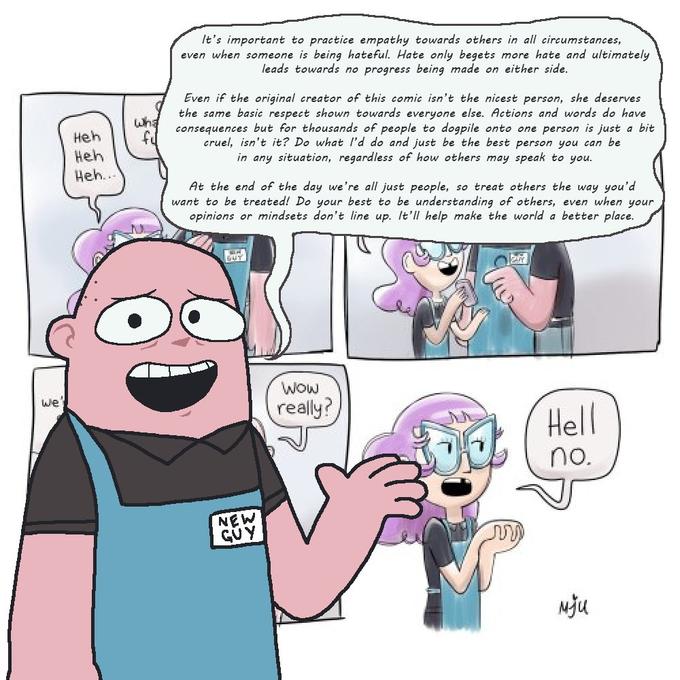 I like this a lot, havnt seen some of those ones. What a wholesome meme.
Am I dead? Am I alive? The answer may surprise you!
------------
I'm the GM of The New Mythos, and play more characters then I probably should.
Top

I agree. It's just so refreshing to see something positive come out of something negative, when it seems like the reverse happens far more on the internet. Maybe it's a sign 2020 will be the start of a better decade.

I especially like the one that showed how New Guy would have handled interacting with the blonde customer, reacting with mild embarassment at misunderstanding but still wishing the other person well. As opposed to being snotty and self-obsessed.
Top

It is fairly impressive just how in-selfaware the artist was. I really wpuld nwver have guessed she was meant to be the likabale character.
Am I dead? Am I alive? The answer may surprise you!
------------
I'm the GM of The New Mythos, and play more characters then I probably should.
Top

Sargon discussing the comic in terms of Platonic vs Aristotelian ethics.
We rise from the ashes so that new legends can be born.
Top

And just to show that the artist hasn't learned their lesson, they posted up a new comic promoting shoplifting.

As predicted, it has already become a meme: https://knowyourmeme.com/memes/sweetbea ... ting-comic

And the counter comics have begun: 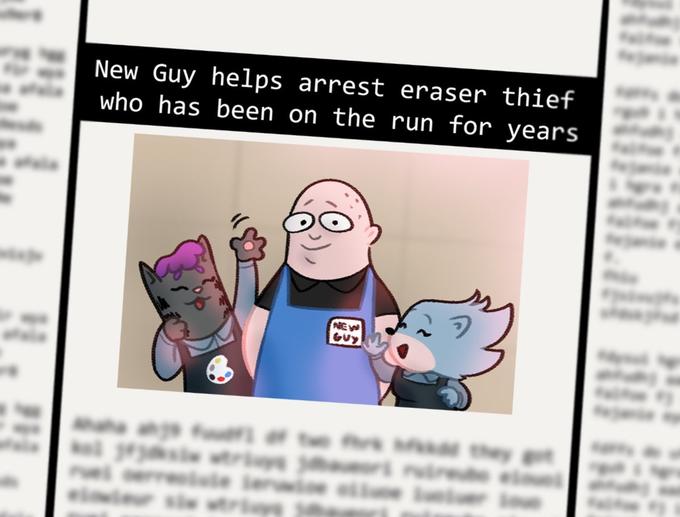 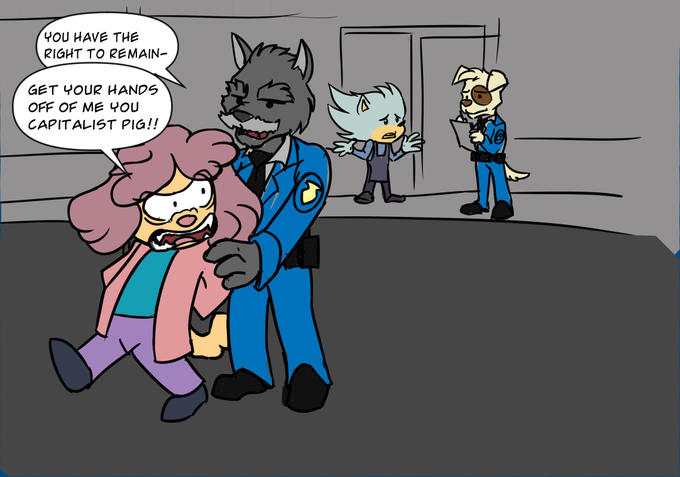 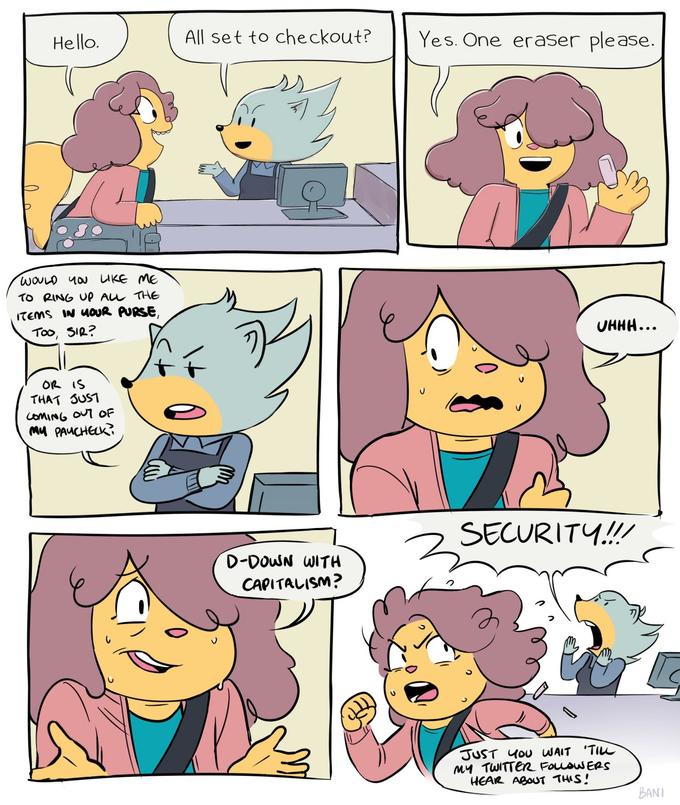 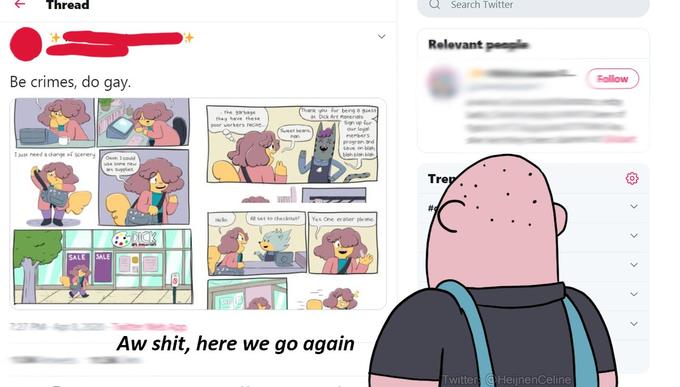 And there's the brilliant hot take of "the artist is trans, so it's wrong to make fun of them for drawing a comic that promotes stealing, also fuck the police": https://i.kym-cdn.com/photos/images/new ... 12/7d4.jpg

So it looks like sweetbeans99 is determined to win the award for least self-aware comic artist on the internet. Good luck to them.
Top

What a conplete and utter ass. If they did it to seek attention though, they've certainly succeeded.
Am I dead? Am I alive? The answer may surprise you!
------------
I'm the GM of The New Mythos, and play more characters then I probably should.
Top

Doctor Malsyn wrote: ↑
Tue Apr 14, 2020 1:36 am
What a conplete and utter ass. If they did it to seek attention though, they've certainly succeeded.

When it was pointed out that employees have any difference between what the register shows and what the register total should be taken out of their paycheck, and that shoplifting can get employees fired, the writer commented that isn't the fault of the shoplifter, but of the heartless corporation and/or the heartless store-owner for taking it out on the employee. Never mind that anyone that's worked retail knows that a big part of the training is to catch shoplifters, and employees are absolutely held responsible for not doing their due diligence in checking customers.

I mean, imagine trying to apply that logic anywhere else?

"You were evicted from your home because someone broke into your house, took all your money and left you unable to pay rent? That's not the thief's fault, it's the fault of the heartless property owner."
Top

Ares wrote: ↑
Tue Apr 14, 2020 2:31 am
"You were evicted from your home because someone broke into your house, took all your money and left you unable to pay rent? That's not the thief's fault, it's the fault of the heartless property owner."

"I punched you in the face, you couldn't afford timely medical care, you had a bleed on the brain, you died.... That's not my fault, it's the fault of the heartless medical establishment."
Top
Post Reply
9 posts • Page 1 of 1

Return to “Books, Comics and Web-Comics”