[Recruiting] D&D 5e genre-busting mashup-game: Fractured: Heroes of all times against the Darkness

For all of your Play-By-Post games.
Post Reply
113 posts

Not just could, you are. Although, if you go, say, from Japan during the Sengoku era to the Middle Ages during the Crusades, you would not change history, it's another timeline entirely.
Top

Since it D&D5e, that implies that magic will be part of the game... How would that be handled? If I made a character from the Kingdom of Jerusalem (1191 CE) could they be a Wizard?

He could do what they did in Dimension 20:Unsleeping City. Pretend it's always been there, just nobody believed it was real.
Top 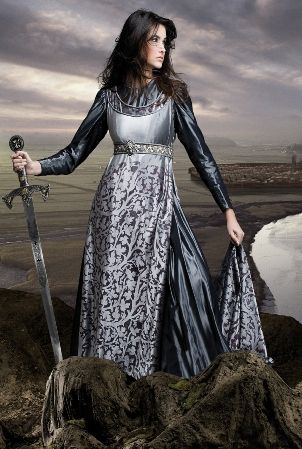 Lady Cassandre of Jerusalem is the youngest daughter of Amalric, King of Jerusalem, by his second wife, Maria Comnena. Cassandre was born on 4 March 1175 CE.

Amalric died unexpectedly on 11 July 1174. Three years later, Maria Comnena married Balian of Ibelin. Amalric's son by his first marriage, Baldwin IV, was crowned king two weeks later. Before long, it became obvious that Baldwin suffered from lepromatous leprosy. To secure the succession of the ailing king, his sister, Sybilla, was given in marriage to William of Montferrat in November 1176, but he died seven months later.

The matter of succession to the throne would dominate the lives of everyone in her family for years, leaving Cassandre isolated and alone. She was raised by nurses, nannies, and private tutors at a country manor outside Ascalon. Her older sister, Isabella I became Queen regnant of Jerusalem in 1190 and the political situation had begun to stablize. Reports reached the court that young Cassandre was a stubborn child and a difficult student, but Isabella I ignored them. Rumors swirled that Cassandre was prone to wandering the castle grounds in the dead of night and had been found, more than once, sitting in the castle armory having conversations with someone no one could see, Isabella I attributed this all to malicious gossip,

And then the sky came crashing down on top of the kingdom... As the great metallic star ripped open the night sky above Jerusalem, Cassandre watched from the rampart's of her sister's palace. Servants and retainers screamed in terror, many wept, and all around her everyone prayed to the Lord for protection. As had been the case for most of her life, everyone ignored Cassandre. Had any of them paid attention, they'd had heard her whisper to herself "Well, it's about time."

(for how Jericho got to level 2, read the The Sacetts, just replace the Main lead's names and have Selleck woo the Don's Daughter instead.)
You'd think he'd leave well enough, especially after what happened in Santa Fe. But just like his grandfather and great-grandfather before him, he had to help that Commanche Shaman out. Taught the way's of "Spirit Magic" by him as reward for saving his life, Jericho didn't think much about it....Untill the sky tore open like a bag getting ripped.
While everybody was running around and panic-stricken, Jericho pulled up his hat slide his Rifle over his shoulder and said,
"Issiah's gonna be mad at me fer missing Dinner with him & Dona again...."
JERICHO CANTRELL
Race: Human (Variant) Background: City Watch
Class: Ranger(Hunter Conclave) Level: 5

Like the characters so far. In regards to magic...yes, it has always been there in one form or another. However, direct, open magic had been much harder to perform until the dimensional barriers went partially bye-bye. All occultists found their powers increasing dramatically, same for priests - except in prehistoric Mu, when magic had been much stronger anyway, people from there would not notice any difference.
Also, to people from simpler times, much of the tech from the starship also looks like magic.
Top

Neo-Paladin wrote: ↑Tue Feb 23, 2021 9:57 am Like the characters so far. In regards to magic...yes, it has always been there in one form or another. However, direct, open magic had been much harder to perform until the dimensional barriers went partially bye-bye. All occultists found their powers increasing dramatically, same for priests - except in prehistoric Mu, when magic had been much stronger anyway, people from there would not notice any difference.
Also, to people from simpler times, much of the tech from the starship also looks like magic.

So your pulling the MCU Thor ploy up for the Hi-tech stuff.....Neat.
Top

Neo-Paladin wrote: ↑Tue Feb 23, 2021 9:57 am Like the characters so far. In regards to magic...yes, it has always been there in one form or another. However, direct, open magic had been much harder to perform until the dimensional barriers went partially bye-bye. All occultists found their powers increasing dramatically, same for priests - except in prehistoric Mu, when magic had been much stronger anyway, people from there would not notice any difference.
Also, to people from simpler times, much of the tech from the starship also looks like magic.

So your pulling the MCU Thor ploy up for the Hi-tech stuff.....Neat.

Well, take someone from the Middle Ages. What would they think if they saw someone with a portable forcefield or a plasma gun? Of course it's magic

Besides portals in time, some portals also lead to other worlds with their own inhabitants and perils. These are:

Sselgax: A massive swamp, full of giant insects and deadly but also beneficial plantlife. It's the origin of the Black Fever, a sickness that can raise the dead as shambling abominations. Sselgax is ruled by snake-people who react violently to intruders. But even they, with all their sorcerous might, respect the mighty dinosaurs that still call the world home...

Akaross: A red and dry world, cold and inhospitable. However, there is life here - the tribal Karossi, who manage to wrest life from the deserts.
All over Akaross, there are signs of an ancient and powerful culture using a mixture of magic and science...but these ruins are protected by ever-vigilant guardians.

Iskaton: A world wracked by a generations-long war between two civilisations who, despite being decimated and fighting only over ruins now, cannot think of piece. The remnants of horrible military experiments and abominable weapons haunt both parties, no longer able to tell friend from foe.

The Plateau: If the darkness that has spread with the opening of the portals has an origin, it is here. A place of eternal twilight underneath cold and pitiless stars, it hosts inconceivable terrors and temples to nameless things that burrow through dimensions as easily as through earth and sky. Some Jewish scholars describe this world as one of the Qlippoth, an unfinished universe God abandoned. Others call it Hell or the Nightmare Realm, equating it with places like lost Carcosa or Leng. But as always...nothing in the cosmos really cares what we humans call it.
Top

Weeelllll, my interest would hinge on whether or not my character is allowed. I've been wanting to play this character for the better part of a year now, but I've so far never had the opportunity.
My character is a cat girl bioroid supersoldier from the 23rd century who was transported from her own time to this world (maybe through an unstable portal?) In the process, her gear was either destroyed rendered unusable, leaving her to fend for herself with nothing more than what her creators endowed her with. Crunch-wise, she's a monk (but whereas an ordinary D&D monk gained their abilities through many years of rigorous training, she has them innately) with a 3rd-party race, a Monastic Tradition that I cobbled together from existing ones, and (although this one isn't a deal-breaker if you say no) a custom background.
I know this is probably asking for a lot, but you'd make a girl really happy if you'd allow it. ^w^;;
Top

One thing about proficiencies:

A character is proficient with the firearms and technology common to their era. A Samura from Sengoku-era Japan would be proficient with musket-like guns and pistols, someone from the Old West would know how to handle revolvers and rifles and someone from post-apocalyptic Mexico knows their way around modern guns. And for Great Zimbabwe, Crusade-era Jerusalem or Mu, bows are the height of technology, with crossbows being the absolute pinnacle of missile weapon.
For ease of use, I'd say that proficiencies are backwards compatible, even though I doubt many gunslingers would know how to reload a flintlock pistol.

Instead of receiving an attribute increase or a feat, you can instead decide to gain proficiency with another era's firearms. Also, alien tech guns require their own proficiency.
Top

I don’t want to step on Neo-Paladin’s toes since he’s already said “No,” but this concept could be made to work with entirely official D&D5e resources.

Use either the Shifter (Longtooth or Swiftstride) or the Tabaxi as your race (depending on how catlike you see your cat-girl). Use the Monk class with one of the official Traditions and an official Background.

Might not fit Neo-Paladin’s vision for this campaign, but it would probably be more appealing to other DMs.

I suppose that brings the follow-up question: Are characters expected to be human (except, possibly, those from post-apocalyptic Mexico)? Are other races allowed from those other worlds? Or were some Earth natives "Changed" to D&D races?
Top
Post Reply
113 posts