Where in all of your character write ups will go.
Post Reply
202 posts

SolarOracle wrote: ↑
Sun Sep 13, 2020 2:17 am
Nah, he has to use the power again, but he seems to not waste as much time when reactivating it as when using it the first time.

Reduced Action (Free Action) Limited to targets who've failed at least one resistance check? (Apply the limitation only to the points that the extra costs.)
Top

Davies wrote: ↑
Sun Sep 13, 2020 2:20 am
Reduced Action (Free Action) Limited to targets who've failed at least one resistance check? (Apply the limitation only to the points that the extra costs.)

Hmm, might work, yeah, but I feel like that might just make the insane ramblings that is that text wall even more insane and less comprehensible, LOL.
Top 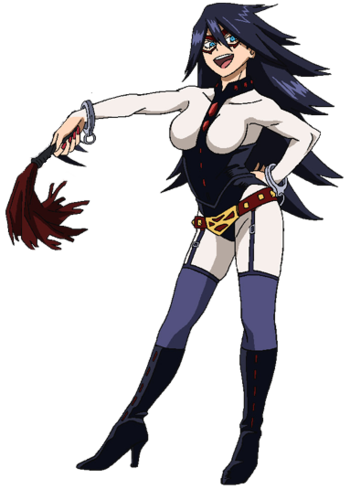 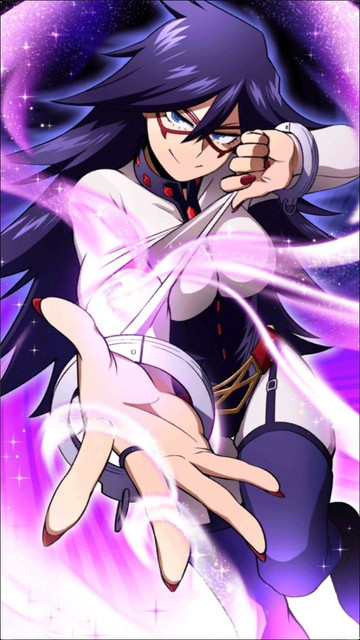 
About: U.A.'s modern hero art teacher, Midnight is a somewhat flirty and playful person, but who also seems to be somewhat demanding of her students. Her quirk, Somnambulist, allows her to create a pheromone-based aroma from her body that puts people who smell it to sleep, and is said to work more efficiently against male targets.

Due to how her quirk works, Kayama wears an easily tearable outfit, which she rips part of whenever she needs to use her power. Originally, she wore outfits that exposed as much skin as possible, and is the reason for the current laws in Japan that dictate the maximum ammount of skin exposure allowed by a hero costume, a very comical detail that explains her title as "The R-Rated Hero". Midnight also oftenly becomes excited by romance and the day-to-day life stuff of teenagers, talking about how much she misses the "wonders of youth" and stuff, something that happens in a few funny scenes.

Throughout the story, Kayama has taken more of a supportive role, helping out the students with stuff and being the announcer and comentator for the school festival events. Her only fight in the main series was against Mineta and Sero in the exam fight against the teachers, and her using her quirk to stop Bakugo and Todoroki's fight in the school festival. Midnight was also school friends with Eraser Head and Present Mic, and was the one to indicate Eraser Head as a teacher for U.A.

Midnight is a pretty fun character overall, and was explored really well on the Vigilantes spinoff, with her interractions with the main cast there and her friendship with Aizawa being explored really well. It's also worth mentioning that she has a small team of four sidekicks called "The Midnight Boys", which is a small group of four attractive young guys. The author has also commented that he decided to make Midnight due to him really liking sexy characters and him feeling like he hadn't added enough of them, thus the idea to theme Midnight around a, like, dominatrix or whatever and giving him a provocateur-like personality.

As for the build, I feel like her attacks might have ended up a bit too high. I was originally going to give her Attractive 2 instead of 1, but considering she doesn't seem to cause an effect on literally every person she sees, I think a single rank would be more accurate.

Outfits: Kayama usually wears very casual and comfortable clothing, and ties her hair. Her hero costume is a white skin-tight bodysuit (that was originally pink in the manga) with a stylized black leather leotard above it that connects to her neck. She wears a red belt with a golden insignia, a pair of thigh-high purple stokings and a pair of tall black high-heeled boots.
Top

Solid Midnight build. I agree with your take on Attractive, one rank seems to fit her well. Here's hoping that she's still in the game.
Also, your bringing up her high school days with Eraser Head and Present Mic made me want to ask: Are you going to post a build of Loud Cloud?
Top

MarvelLion wrote: ↑
Mon Sep 14, 2020 2:19 am
Solid Midnight build. I agree with your take on Attractive, one rank seems to fit her well. Here's hoping that she's still in the game.
Also, your bringing up her high school days with Eraser Head and Present Mic made me want to ask: Are you going to post a build of Loud Cloud?

Thanks! I deffinately will build Shirakumo, tho I'm still not sure if I should do it parallel to whenever I do the Kurogiri build or if I should do it whenever I get to the Vigilantes builds, since that's where he got the most screentime. Regardless, I feel like we've been shown enough of him to the point that a build of him is absolutelly doable.
Top 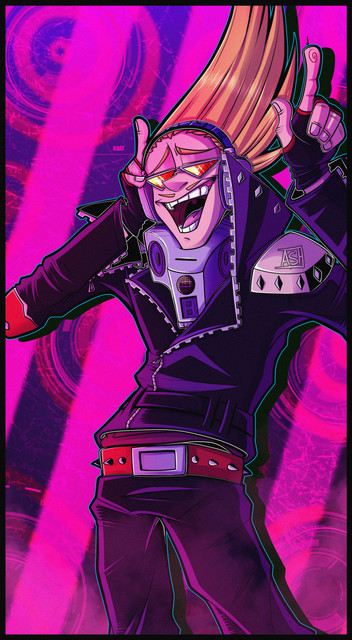 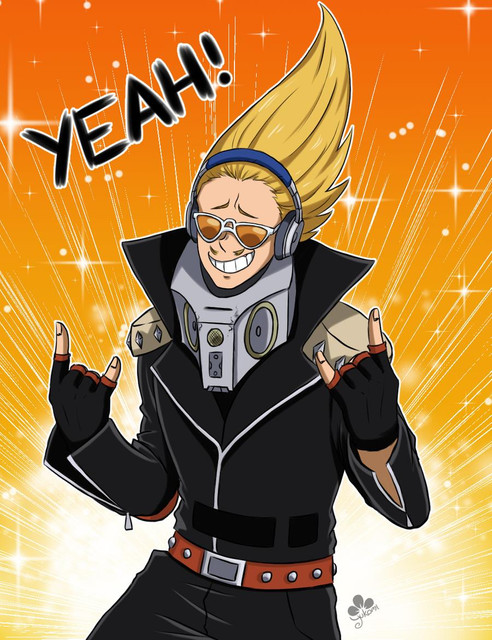 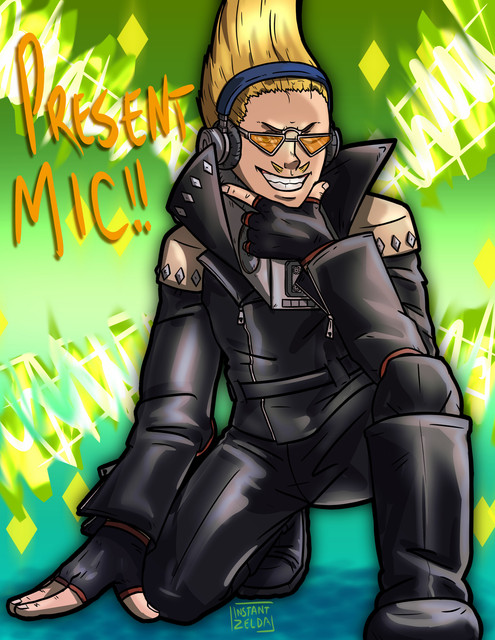 I had no idea he was such a popular character until I began looking for images for the build and saw how many fanarts there were, LOL.

Powers
Quirk - Voice
Feature: User can heighten the volume of their voice at will. [1]

Voice Based Quirk: Yamada’s quirk, like its name implies, relies on him using his voice to work properly, and will tire out his throat if overused. Additionally, if he is ever in a situation where he can’t use his voice, he will be unable to use his power.

Obsession: Hype and Drama: Yamada is obsessed with presenting things dramatically and in an entertaining way, using his quirk and radio presenter-like persona to excite the audience in any situation, no matter the size of his audience.


About: U.A.'s english teacher, Present Mic is a pro hero with a very energetic and cheerful atitude, as well as a radio presenter-like personality, with him narrating and dramaticising events happening around him to try to entertain the people around whwnever possible. His quirk, Voice, allows him to naturally increase the volume and intensity of whatever sound he produces from his voice, to levels that can harm others' ears.

Yamada favours fighting from afar due to his quirk, delivering powerful attacks that harm many enemies at once from a great distance, as shown when he managed to harm both Jiro and Koda with his quirk from many hundreds of feet away during their combat exam fight against him. He seems to know how to fight from a close range pretty well too, however.

He was friends in school with Eraser Head and Midnight, as well as with the deceased Loud Cloud, with whom he and Aizawa were planning to form a hero team together after graduation. After that fell through due to Shirakumo's death and Aizawa begining his career as a solo hero, Yamada seems to have become somewhat of the opposite of Eraser Head, with his whole hero persona and all being based around popularity, hyping fights up and cheering up his "listeners". Woith that said, my favorite character moment with Present Mic happened recently on the manga, where he, remembering the death of Loud Cloud and his subsequent brainwashing and transformation into the supervillain Kurogiri by the League of Viallains, becomes seriously enraged and punches the doctor who did that to his dead friend right in the face with his "DJ Punch", a scene that was awesome fanservice, since his friendship with Loud Cloud hadn't been really shown in the main series.

I really like Present Mic as a character, with him contrasting really well with Aizawa really well, and him being really fun in scenes where his hyping of events and dramatic narration are present while the main cast does stuff. He also seems to be pretty popular with the fanbase, I guess, which is something I just found out, LOL. Oh, and it is also worth mentioning that a lot of people believe that he is the "traitor" in U.A. that has been foreshadowed since early in the series, something I don't really believe since all the evidence points to Kaminari being the traitor, but I felt like I should mention that. He has 2 Super Moves that he's shown, one being the above mentioned "DJ Punch", which is just a straight hook delivered with a lot of strength, and a more powerful and concentrated version of the normal power of his quirk, called simply Loud Voice. I look forward to seeing more of Present Mic in the series.

Outfits: Yamada wears stylish and fashionable clothing on his day to day life, tying his hair in a bun. His hero costume is a tall-collared black jacket with beige shoulder pads and red stylized elbow guards, a pair of black fingerless gloves with red edges, a pair of grey headphones, a pair of long black pans, a red belt with a metal buckle and a pair of tall black boots. In addition, he wears his Directional Speaker System around his neck, which allows to better control the area affected by his quirk, and looks like a tall metallic neck piece with many speakers.
Top

Hell yeah, Present Mic! How could anyone NOT love him? Seriously, he's brilliant. He can go from a lovable, over-the-top DJ, to a dramatic serious character, especially when he and Eraser Head talk to Kurogiri. I also agree that him being the traitor is absurd. There's absolutely no evidence for it.

As for the build, good as always, but two suggestions if I may: First, maybe add a Phobia complication for bugs; second, a hearing-disabling power for his Quirk, since it shows people hit by it bleeding from and grabbing their ears.
Top
Post Reply
202 posts